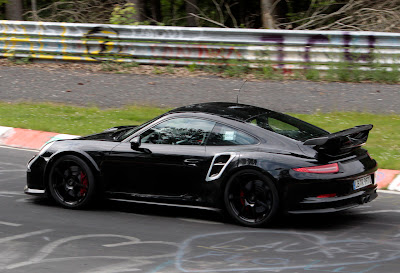 With the recent introduction of the new Porsche 911 Turbo and GT3 versions, the 991 family is getting bigger, but it's not all. It looks like this is going to be a good year if you're planning to buy a track car, Ferrari is developing the hardcore version of the 458, mean while the german engineers are preparing to introduce a very spicy version, the new GT2.
Spotted at the infamous Nürburgring (where else?), we get to see what might look a prototype of the new GT3, but if you notice you can see on the side the air intakes which is typical on the turbocharged Porsches. We even see a GT2 RS on testing, will the new GT2 rip the title as the fastest 911 ever made? Surprisingly, the new GT2 sounds very good, yet less surprisingly is the use of a double clutch gearbox. Oh german engineers, don't make the same mistake you did on the GT3 and let the customers choose also the good old clutch pedal.