Ferrari 458 Speciale spotted on the road 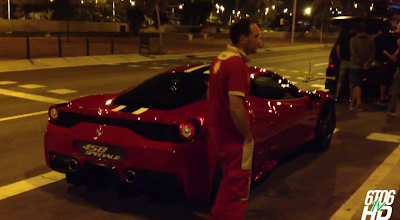 Hopefully we don't have to wait until the 10th of September to see the Ferrari 458 Speciale for real on its world debut at the Frankfurt Motor Show. The latest creation of Maranello has been spotted at night in the streets of Barcelona during the making of an official video for Ferrari.

The Ferrari 458 Speciale is the most extreme road-going version of the 458 and follows the example of the previous models such as the 430 Scuderia and 360 Challenge Stradale. Compared to a standard 458 Italia, the Speciale is 90kg lighter (with a curb weight of 1290kg), mean while the 4.5L V8 engines gets an extra 30hp with a maximum power of 600hp.
Posted by Marco at 00:00