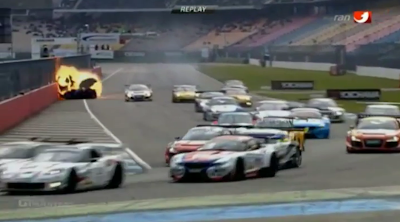 During the ADAC GT Masters weekend at Hockenheim, on Sunday the race has started with a pretty scary accident which has involved Gerd Beisel in his Corvette C6R. A contact with the Audi R8 on his right has caused him the lost of traction and right after a collision at high speed towards the pitwall.
The impact was so violent to cause a fire and move the car for several metres after the crash, but hopefully the driver didn't reported injuries.