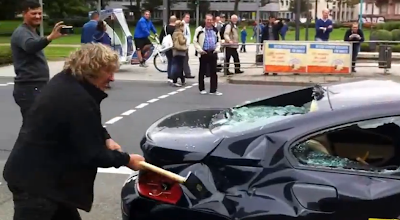 In the past we have heard stories of people who decided to destroy their expensive cars in public to protest against the manufacturers for their poor service, you might remember the Lamborghini Gallardo and Maserati Quattroporte smashed in China for this reason.
This time we move in Europe but the story is basicly the same, a disappointed owner of a BMW M6 has decided to destroy his car in Frankfurt in front of the 2013 IAA Motor Show, a very strategic place if you want now the maximum media coverage. The owner has claimed that his M6 had several technical issues and after all, BMW Munich and BMW Italy (where he bought the car) always claimed that the car was ok, which is quite hard to tell now.