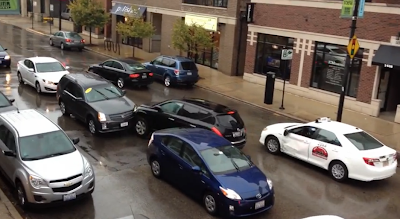 If you play Grand Theft Auto you know what I mean by saying we don't get to see something like this every day! The driver of this Nissan Murano has rear ended a white taxi in Chicago, but actually the video starts after as the driver is already outside the taxi and tries to stop the Nissan.

The Nissan fails a couple of times to escape from the area and once the taxi driver attempts to smash a window, the Nissan pushes the pedal to the metal and just like a flipper ball it runs away by hitting several cars.