Lately, Justin Bieber has been spotted around Los Angeles behind the wheel of his brand new Ferrari 458 Italia, which is quite easy to recognize with those wheels. He's always being chased by paparazzi that even put at risk their lifes, to snap a good picture to sell. This time, a paparazzo has paied an high price for his attempt to snap a picture to Bieber's Ferrari. His white Ferrari was pulled over by police for speeding on the Interstate 405, but apparently the driver wasn't Bieber himself, but a friend. Once the paparazzo arrived on the scene, he crossed the road to get closer, but he was hit by an oncoming vehicle on his way back to the car. 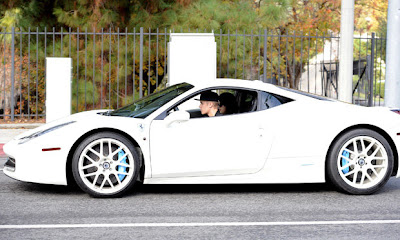 I'm not a fan of Bieber, but just like any other celebrity, he gets too much attention and is always being chased by annoying paparazzi that invade his privacy. In this recent video he stops in the middle of the traffic to confront a paparazzi that was following him.