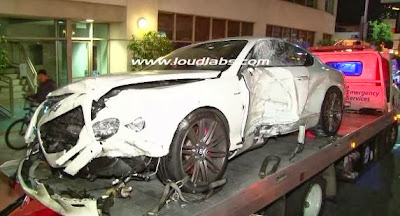 Give the key of a powerful supercar to a young, inexperienced driver and then don't be surprised to witness a scene like this. A 18 years old driver has totalled (dad's car?) a Bentley Continental GT in the streets of West Los Angeles. The driver lost the control of the Bentley and crashed into a few poles and into a car.

The following video shows the aftermath and a tour of the crashed Bentley and the accident site. The Bentley Continental GT is a quite heavy and robust car, needless to say that the speed might have played a key role. After all, the good thing is that nobody got hurt (you can see the young driver hiding with the hooded vest), the bad news is dad won't be happy.