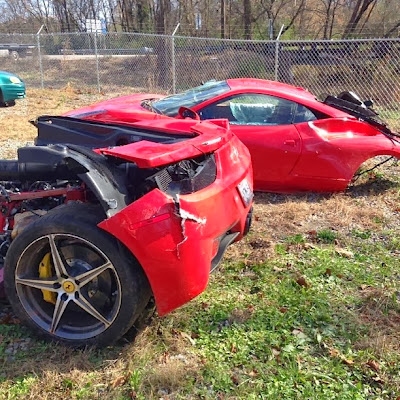 If you're looking for a cheap (or just half) Ferrari 458 Italia to buy this might be your moment. An employee from a transport company (in Birminghman, Alabama) decided to go for a joy ride with a friend in a 458 before to be loaded into the truck, but the result of this recklessness had a negative effect as the driver lost the control of the Ferrari at around 225 kph (140mph), hit a post and broke the car into two pieces.

Both occupants are still alive but the driver is in coma, mean while the passenger is heavily injured. The Ferrari is quite damaged but also, most supercars are designed to split in two pieces after a rough collision, it's an efficient way to dissipate the energy of the impact.
Posted by Marco at 00:00